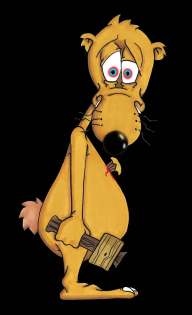 It.s tough being immortal when you are born suicidal..Such is the plight of the long-suffering Lempire. Part Lemming part Vampire, this rare and exotic creature is consigned to a fate worse than death-

Failure! And he’s right cheesed off about it…

As everyone knows, the Lemming has a profound personality disorder; from the

has… let us say… time on his hands! One is on a crash course with destiny…

and the bottom of a steep cliff. The other’s got a lunch date with eternity.

Hereafter in his hilarious, gloriously illustrated and suitably surreal